The first German military force posted to Southwest Africa in arrived in June, 1889 and consisted of 21 officers and men under Hauptmann Curt von François (1852-1931).  The " François Troop" was actually a mercenary force under private contract for three years service, and did not formally become an imperial military force until 1894.  Hauptmann von François was accompanied by his younger brother Hugo (1861-1904) , the man with the splendid handlebar mustache, above.

The von François brothers came an aristocratic German family of Hugenot ancestry.  Their grandfather Karl von François served against Napoleon in 1812-1813 as a junior officer with the Russian Sumschen Hussars and ended his military career as a Prussian Lieutenant General.  Their father, Generalmajor Bruno von François, died leading his division in 1870 at Spicheren, Lorraine, during the Franco-Prussian War.  Another François brother - Hermann (1856-1933) was a highly decorated  German General de Infantrie during WWI - Pour le Mérite with oak leaves - who played a decisive role in several battles on the Eastern Front including Tannenberg.

Hugo von Francois started his military career in the 26th Regiment and was adjutant of is 2nd battalion before posting to Africa.
During his service in the François Troop, he was promoted to Lieutenant (1891) and Hauptmann (1896).  In his portrait photograph he wears a brown corduroy dress uniform with the pips of an oberleutnant on his shoulder and a spiked pith helmet, That style of helmet is also visible in the photograph at right from the archives of the Polytechnic Institute of Namibia, which shows a number of Schutztruppen with Theodor Leutwein, who replaced Curt von François in 1894.  Most of these men are in early (1891-1896) Schutztruppe cord uniforms with Polish-style pointed cuffs, but there are two spiked pith helmets worn by the men standing at the extreme left and right of this group. 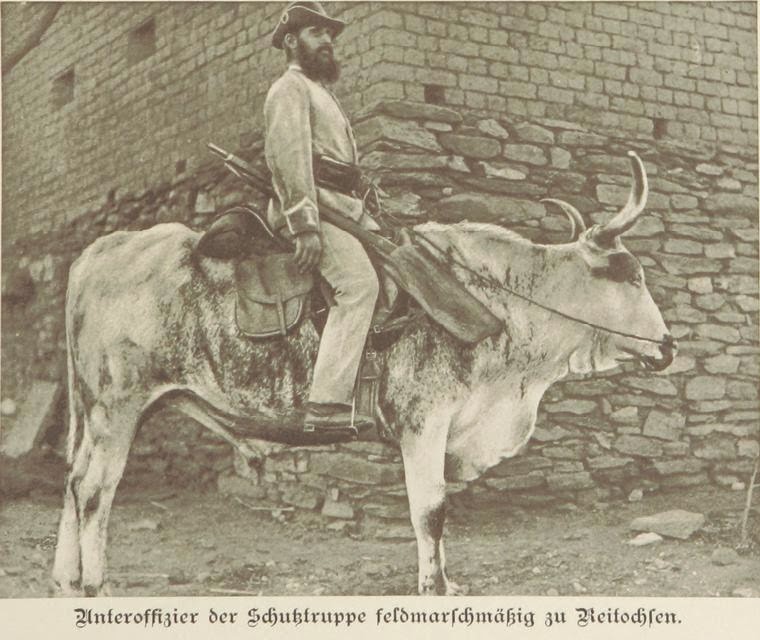 Hugo von François wrote Nama und Damara: Deutsche Süd-West Afrika (1896) in which he promotes the development of the colony by utilizing native labor (and cattle).  It includes many photographs and illustrations not often seen in other contemporary accounts, such as this non-commissioned officer mounted "Herero-style" on a bull.

Curt von François only spent five years in German Southwest Africa, but his brother Hugo, who later served in 4. Grenadier Regiment, retiring from from military service in 1899, returned as a settler with his family in 1901.  He was a Captain in the Reserves when the German-Herero war began.  He moved his family to Windhoek and prepared its defense.  In February, 1904, he accompanied the Ost-Abteilung under Major von Glasenapp and was killed on March 13th at Owikokorero. 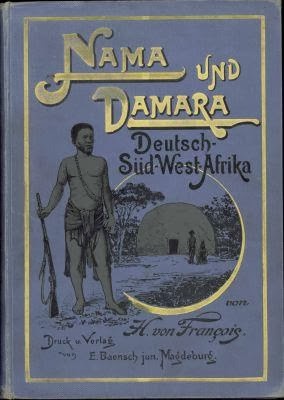